An excellent saloon Rock 'n' Roll act, the Memphis Rockabilly Band was from Boston, of all places. Richmond was one of their favorite towns, as they toured the East Coast for about ten years, beginning in the late-1970s. Perhaps there was an extra appreciation here then for Rockabilly music. There was a handful of popular bands based here playing in that style. The Bopcats and Shake and the Drakes were among the Fan District groups feeling/riding a revival wave of interest in Buddy Holly, Gene Vincent, Jerry Lee Lewis, Rick Nelson, et al, driven in great part by Brits such as Dave Edmunds and Nick Lowe (Rockpile). 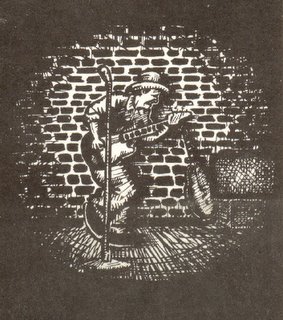 Bill Coover
Memphis Rockabilly played at Hard Times a bunch of times. The band, fronted by Jeff Spencer, appeared at High on the Hog in 1980 and ‘81, when the annual throwdown was still being staged in the alley behind Chuck Wrenn’s house. Every year, it seemed, they would show up with a new bass player, as a fourth. Bill Coover (guitar, saxophone) and Terry Bingham (drums) were the other two regulars for the whole ride.

Over the last week, like many of my readers, I’ve given much thought to those salad days. I've seen so many faces from that time at the Harveys memorials. Bryan Harvey’s band then was The Dads. Dancing was enjoying a revival then, too. The Dads were a peppy band with quite a following among the region’s young Rock ‘n’ Rolls girls. It was a happening scene. Like any scene, I suppose you had to be there...

Here’s a link to a Memphis Rockabilly Band web site. I don’t know who put it up, but the facts look close to the truth. I did the illustration of Bill Coover above in 1984 for a series of Fan District trivia cards.
Posted by F.T. Rea at 8:24 PM

Ah, MRB. As I've gone over my quarter-century of Richmond musical memories this week these guys make up quite a bit of that tapestry. Memphis Rockabilly was the second band I ever saw at Hard Times - the first was Boys From Skateland featuring a young Bryan. Had the pleasure of sharing a HOTH stage with MRB and NRBQ once during my 10 hazy, crazy years with The Bopcats. I remember at a Hard Times show I bought the "Lindy Rock/Duck Tails" single from Jeff.

I have always managed to miss the "Hog". I have lived here all my life, and never have made it downtown for this thing! If I had made it down in the late 70's- early 80's, they probably would have had to carry my home (in a box?). So then I met a wonderful woman, 12 years later, we married, and then here niece married Bill Coover! We had a bit of a jam at the wedding reception up in PA, a real good time!
Short story long, I believe I'll have to make it down this year to see my nephew-in-law wail with the MRB! They are playing later that night at Shenanegans! (Shameless Plug!)

That should be " her niece ", sorry for the sloppy copy!