Kaine to Speak for Dems 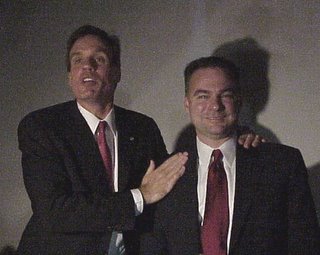 Mark Warner introduced Tim Kaine to the election-night party in the Canal Club, Nov. 2, 2004, as "your next governor!"
The Washington Post reports Virginia's Gov. Tim Kaine will offer the Democrats' televised response to President Bush's State of the Union Address on Jan. 31.

"...In the wake of the congressional lobbying scandals, Democrats are attempting to capitalize on what they call a culture of corruption in the Republican-controlled Congress. That makes it appealing to turn to an outside-the-Beltway governor, rather than a member of Congress, for the response to Bush's speech this month. For Kaine, the selection is the culmination of a whirlwind of activity since he defeated Republican Jerry W. Kilgore on Nov. 8."