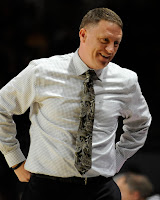 Here's my take on VCU's men's basketball team's weekend that was and its much-anticipated weekend ahead in the limelight of the NCAA Division I Men's Basketball Tournament. It was written for Style Weekly.

In recent years VCU has grown accustomed to participating in that postseason tournament. The Rams are making their 17th NCAA appearance, overall, and this year's bid is the eighth of the past nine seasons.

The game will mark Rams' second-year head coach Mike Rhoades' first trip to the Big Dance as VCU's skipper. It will take place at the Colonial Life Arena in Columbia, S.C. CBS will carry the broadcast. 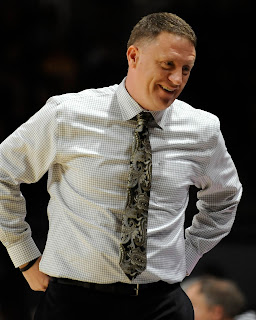 The loss sent Coach Mike Rhoades' (pictured left) team home from the A-10 tournament early, to shake it off and prepare for their first game in the NCAA tournament.

Given the loss of Marcus Evans (left leg injury), VCU's all-conference point guard and top scorer, somebody had to step up. Marcus Santos-Silva did exactly that: 26 pts./22 reb. Unfortunately, some of his teammates couldn't seem to get over seeing Evans helped off the court in pain.

However, VCU still should not have allowed a clunky team that averaged 67.6 points per game during the regular season, playing against opponents with defenses inferior to VCU's, to score 75 points in a postseason tournament tilt. Period.

The VCU Rams were brimming over with confidence during their 12-game winning streak to finish off the regualr season. It was obvious in their performances during those games and in post-game interviews. The kids were having a good time and it showed -- but not in a bad way.

Following VCU's frustrating loss in Brooklyn the Rams head coach is now being called upon to restore his team's confidence in itself. Its confidence that the coach's "army" scheme not only worked in the regular season it actually has them prepared -- as a team that uses 12 players in most games -- to fill into the gaps, to get better and move on.

Playing without Evans in VCU's first game in the NCAA tournament will change the chemistry of the Rams offense, but the math is simple. It will mean other capable players have to hunt for shots.

Going into this season, coming off of last season, Rhoades resolved that VCU's half-court defense would be much better this year: “We're going to guard people and going to stop people.”

If VCU can get it's swagger back in gear, its feared overplaying defense can hold a good team that's never seen the Rams defense before to a score in the 50s.

That's how to win the next game with the Rams top scorer unavailable. Now Coach Rhoades has a job to do. It's the job he was born to do.