A memorial service for my brother Steve -- Stephen M. Rea, 55, who died in his sleep in his Goochland home on July 8 -- was held at Gum Spring United Methodist Church on Wednesday, July 20.

At four and five years old Steve had a special power that was amazingly reliable: He could predict whether it was going to rain with an eerie precision. Many a time neighbors would come over to the back fence to check with Steve if they were planning a picnic, a day at the beach, and so forth. He was flawless in predicting whether it would rain the same day. No one spoke as he scanned the sky. What was he seeing or smelling?

Steve would squint his eyes, and sigh, then he'd say "yes" or "no." Steve was never wrong. By the time he was about six he had outgrown his knack and couldn't remember how he did it.

Steve was a U.S. Navy veteran and died as a faithful friend of Bill's. The photograph above shows Steve with his partner in their costumes (circa 1956) for Miss Fry's dancing review at the Mosque.
Posted by F.T. Rea at 4:11 PM 1 comment:

Having devoted countless hours to competitive sports and games of all sorts, nothing in that realm is quite as galling to this grizzled scribbler as the cheater’s averted eye of denial, or the practiced tones of his shameless spiel.

In the middle of a pick-up basketball game, or a friendly Frisbee-golf round, too often, my barbed outspokenness over what I have perceived as deliberate cheating has ruffled feathers. Alas, it's my nature. I can't help it any more than a watchful blue jay can resist dive-bombing an alley cat.

The reader might wonder about whether I'm overcompensating for dishonest aspects of myself, or if I could be dwelling on memories of feeling cheated out of something dear.

OK, fair enough, I don't deny any of that. Still, truth be told, it mostly goes back to a particular afternoon's mischief gone wrong. 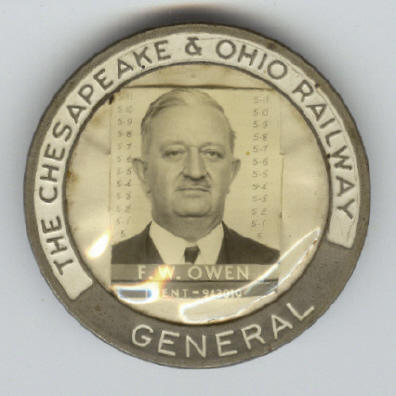 This is a C & O identification badge from the 1950s

A blue-collar architect with the Chesapeake & Ohio Railway for decades, my maternal grandfather, Frank Wingo Owen was a natural entertainer. Blessed with a resonant baritone/bass voice, he began singing professionally in his teens and continued performing, as a soloist and with barbershop quartets, into his mid-60s.

Shortly after his retirement, at 65, the lifelong grip on good health he had enjoyed failed; an infection he picked up during a routine hernia surgery at a VA hospital nearly killed him. It left him with no sense of touch in his extremities. Once he got some of his strength back, he found comfort in returning to his role as umpire of the baseball games played in his yard by the neighborhood's boys. He couldn't stand up behind home plate, anymore, but he did alright sitting in the shade of the plum tree, some 25 feet away.

This was the summer he taught me, along with a few of my friends, the fundamentals of poker. To learn the game we didn’t play for real money. Each player got so many poker chips. If his chips ran out, he became a spectator.

The poker professor said he’d never let us beat him, claiming he owed it to the game itself to win if he could, which he always did. Woven throughout his lessons on betting strategy were stories about poker hands and football games from his cavalry days, serving with the Richmond Blues during World War I.

As likely as not, the stories he told would end up underlining points he saw as standards: He challenged us to expose the true coward at the heart of every bully. "Punch him in the nose," he'd chuckle, "and even if you get whipped he'll never bother you again." In team sports, the success of the team trumped all else. Moreover, withholding one’s best effort in any game, no matter the score, was beyond the pale.

Such lazy afternoons came and went so easily that summer there was no way then, at 11, I could have appreciated how precious they would seem looking back on them.

On the other hand, there were occasions he would make it tough on me. Especially when he spotted a boy breaking the yard's rules or playing dirty. It was more than a little embarrassing when he would wave his cane and bellow his rulings. For flagrant violations, or protesting his call too much, he barred the guilty boy from the yard for a day or two.

F. W. Owen’s hard-edged opinions about fair play, and looking directly in the eye at whatever comes along, were not particularly modern. Nor were they always easy for know-it-all adolescent boys to swallow.

Predictably, the day came when a plot was hatched. We decided to see if artful subterfuge could beat him at poker just once. The conspirators practiced in secret for hours, passing cards under the table with bare feet and developing signals. It was accepted that we would not get away with it for long, but to pull it off for a few hands would be pure fun.

Following baseball, with the post-game watermelon consumed, I fetched the cards and chips. Then the four card sharks moved in to put the caper in play.

To our amazement, the plan went off smoothly. After hands of what we saw as sly tricks we went blatant, expecting/needing to get caught, so we could gloat over having tricked the great master. Later, as he told the boys' favorite story -- the one about a Spanish women who bit him on the arm at a train station in France -- one-eyed jacks tucked between dirty toes were being passed under the table.

Then the joy began to drain out of the adventure rapidly. With semi-secret gestures I called the ruse off. A couple of hands were played with no shenanigans but he ran out of chips, anyway.

Head bowed, he sighed, “Today I can’t win for loosing; you boys are just too good for me.” Utterly dependent on his cane for balance he slowly walked into the shadows toward the back porch. It was agonizing.

The game was over; we were no longer pranksters. We were cheaters.

As he carefully negotiated the steps, my last chance to save the day came and went without a syllable out of me to set the record straight. It was hard to believe that he hadn’t seen what we were doing, but my guilt burned so deeply I didn't wonder enough about that, then.

*
My grandfather didn’t play poker with us again. He went on umpiring, and telling his salty stories afterwards over watermelon. We tried playing poker the same way without him, but it didn’t work; the value the chips had magically represented was gone. The boys had outgrown poker without real money on the line.

Although I thought about that afternoon's shame many times before he died nine years later, neither of us ever mentioned it. For my part, when I tried to bring it up, to clear the air, the words always stuck in my throat.

Eventually, I grew to become as intolerant of petty cheating as he was in his day, maybe even more so. And, as it was for him, the blue jay has always been my favorite bird. 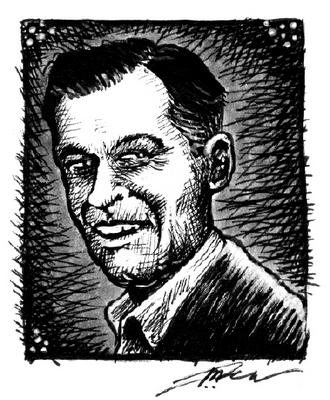 That's right! Absolutely no televised debates with can't-win
candidates, or any candidate who makes sport, however
subtle, of my accent, my totally proud way of speaking.