Greatness in the Rear-View Mirror 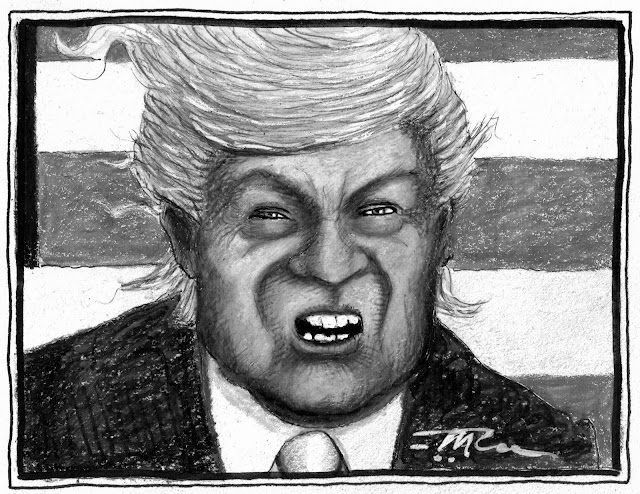 For all his bluster, Republican hopeful Donald Trump doesn't really say much, not in any depth, because he repeats the same catch phrases over and over. Ask him a probing question and he frequently answers with another slogan to bat the question away.

Routinely, when Trump says he will “make America great again,” he doesn't say much about what era(s) of greatness he is looking at. He doesn't make it clear when America was enjoying its greatest time. Or even when it was great enough to suit him.

Does Trump see America's peak of greatness in black and white on a 1950s Zenith? Maybe something like the USA Lonesome Rhodes saw in Elia Kazan's "A Face in the Crowd" (1957)?

Or, was America's last day of greatness the day before Sen. Barack Obama was elected president in 2008?

Uh-oh, economic meltdown and costly unwinnable wars marked that somewhat less-than-great time. And, as Trump likes to point out, 9/11 happened on the last president's watch. Then again, Trump likes the torture-the-Muslims policy as articulated by the previous administration.

So, for real greatness, perhaps Trump means much further back, like before President Ronald Reagan got caught secretly selling missiles to Iran to finance an illegal war in Central America?

Maybe before the Civil Rights movement?

Before women could vote?

Best Place for a Walker Monument? 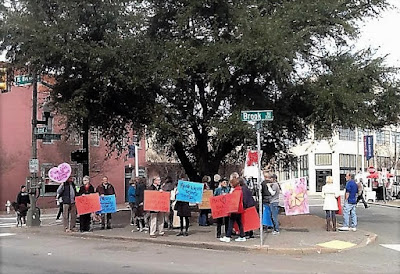 Sure, I can understand the sentiments that would place a Maggie L. Walker (1864-1934) monument in the heart of Jackson Ward, or on its fringe. Then again, maybe other locations should be considered, as well, before settling on one treatment.

After all, public art-wise, planning to erect some sort of appropriate and permanent remembrance of Maggie Walker in Richmond, Virginia ought to happen as soon as it can be done.

So I hope a committee of interested parties with community leaders, art experts, etc., will form and make some recommendations. Maybe VCU could help with the process. In any event, I hope there will be plenty of public discussion. Choosing the right artist/designer will be essential.

By the way, I'd rather see the Walker Monument on Monument Avenue. Let's think bigger than something modest in a public park. As a significant figure from Richmond's history, who would be better than Walker to add to Monument Avenue?

Her credentials are second to none. Plus, I see hope that some Richmonders would see a step being taken toward atonement in such an installation. Its unveiling would create a news story that would draw international notice. Meanwhile, here's a quote from an OpEd piece I wrote for the Richmond Times-Dispatch last summer, which, among other things, suggests just such a new monument.

“... Add signage around the monuments to put them in a context, which would turn Monument Avenue into a museum of sorts. Add more monuments to the stately avenue, statues of Virginians who we now want to celebrate; maybe less emphasis on war. Two of the first names for new monuments that come to mind for me are Maggie Walker and Lewis Powell.”

The RT-D piece also suggests the removal of one of the existing monuments in the row of Confederate luminaries. That's another, but related, matter. To read the entire piece, click here.

Furthermore, I don't see the value of removing a cherished old tree from its little triangular plot of natural land at the intersection of Adams, Brook and Broad St. in the Arts District, in order to stuff a statue into its place and perhaps dampen some of the charm of that neighborhood.


So when I happened upon a demonstration there yesterday (Feb. 20, 2016), a gathering of citizens calling for saving that same tree, well, it put a smile on my face. As it was a pleasant afternoon, I stopped to take a few pictures and talk with a couple of the demonstrators.

Jennie Dotts, a well known local preservationist, put the purpose of the demonstration in a nutshell: “Save the tree and save historic Brook Road – the oldest turnpike in Richmond.” 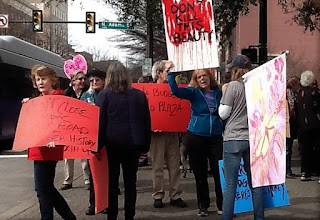 Please note: Having grown up in Richmond, I know there are still some folks in our midst who would surely rather see any sort of Walker Monument in what they would view as a more appropriate neighborhood than Monument Avenue.

Which, to me, is all the more reason for us to think more deeply about the atonement angle of this story. 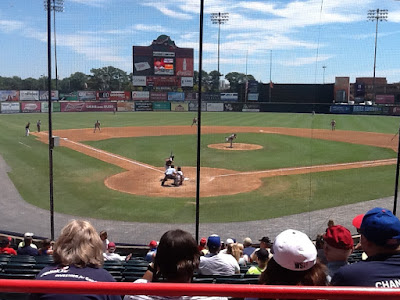 As I've written about the nettlesome baseball stadium issue lots of times, it's no secret that I have been staunchly opposed moving baseball to Shockoe Bottom. That hasn't changed. Furthermore, today I see no good reason to remove professional baseball from The Boulevard. To me, there seems to be plenty of city-owned land around The Diamond, land that's not being used for much now. Land that could be developed for mixed use -- retail, residential, etc.

The puzzle to me is why City Hall has held onto all that land for so long. One day, maybe a Freedom of Information request will shed some light on that mystery. Anyway, here's an excerpt from my most recent rant on this topic:

After the awkward attempt to stifle voices went on for a few more minutes, reluctantly, the microphone and podium were given over to allow for some reactions to the presentation from individuals who hadn’t been paid to be there to be heard. Among other things, this freewheeling finish for the meeting revealed that nearly everyone in attendance stood against banishing baseball from The Boulevard. Thus, the transparent plot to deny the working press easy access to unfiltered push-back from the attendees was thwarted.

Click here to read all of "Picturing the Greater Good," my piece on this topic that appeared on the OpEd page of the Richmond Times-Dispatch on Feb. 13, 2016.

McGovern Would Have Been a Good President 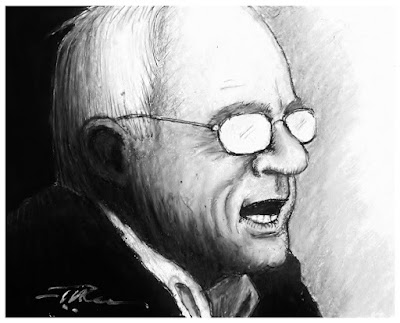 Don't remember the first time I thought that my baby boomer generation connected to the thinking of its grandparents more than the thinking of its parents. That must have been some time in the late-'60s. No doubt, I was looking at the similarities between that generation's ways and times and those of my own.

A cultural explosion followed the end of World War I. A lot of young men came home from the war much less naïve than their parents in many ways. A popular song, "How Ya Gonna Keep 'em Down on the Farm (After They've Seen Paree?)," ushered in The Roaring 20s.

The 1920s in the USA were marked by an explosion of modern art, which leaked into the fresh products being cranked out by filmmakers and magazine publishers. Women were voting and taking jobs outside of their homes. The popularity of speakeasies underlined the defiance in the air. And, speaking of air, radio contributed plenty to the minting of a national popular culture.

As I became more aware of all that history, I saw that my own time's way of challenging establishment customs was similar in some respects to an attitude that seemed to have skipped a generation. The handiest example of that was how they stood on the Vietnam War. My parents' generation seemed much more pro-war than were their parents.

Maybe I also noticed all that because, to no small extent, I was raised by my mother's parents. Anyway, now I'm noticing that a lot of young people are supporting Bernie Sanders -- who sounds like an old hippie at times. Their current support of Sanders reminds me of how thoroughly I was all for Eugene McCarthy at this time of the year, 48 years ago. In February of 1968 I was an anti-war sailor, who was too outspoken about it for his own good.

Four years later, when George McGovern got the Democratic nomination, I was more passionate in my support of him than I've ever been for any presidential candidate. By this time I was the manager of the Biograph Theatre, so I helped to stage an event there to benefit McGovern. My bosses in Washington D.C. supported it without reservation. (The button I designed for the McGovern campaign is pictured below.)

Now my granddaughter, Emily, is a Sanders supporter. Since she's away at school (JMU), she's voting by way of an absentee ballot. I wonder how many of her peers will push through whatever it takes to make sure they vote this year. A lot of people in their parents' generation are expecting them to lose interest in the election as the weather warms up.

Therefore, I sure hope Emily's generation does more to support Sanders than mine did for McGovern. One of the biggest misconceptions about the hippies and young liberals of my salad days is how many of us there really were. While the most visible of us seemed caught up in the so-called "revolution," in truth, it was way less than half of the baby boomers.

Most people my age stayed on the sidelines during the cultural upheaval that is so fondly remembered by movies and television programs looking back on that time. They were spectators who were only too happy when the culture shifted into reverse gear with the election of Ronald Reagan as president in 1980.

Then came a steady drift to the right, politically, that continued for decades. The Democrats of the 1990s bore little resemblance to their counterparts of the previous generation. The drift ended during George W. Bush's presidency. Bush left the White House with "conservatism" in shambles. It's hard for me to see anyone on the GOP landscape who can fix that any time soon.

So, in my view, the Democratic nominee should have an advantage in November. Consequently, barring catastrophic game-changing events, I think either of the Democratic contenders would win the general election. But I think Bernie would beat the Republican nominee by a wider margin than Hillary would. And, I think he would be more help to down-ballot Democrats.

However, for Sanders to win the Democratic nomination it's going to take a huge turnout of young volunteers and voters. Clinton is still the more likely betting favorite to be at the top of the ticket. It's going to take unprecedented turnouts in the upcoming primaries to change that. It may even take a last-stand turnout of every old hippie who remembers what a great president George McGovern would have made. 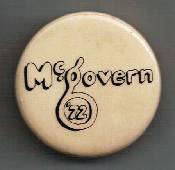