Tim Kaine’s resounding victory on Nov. 8 put smiles on a lot of faces in Richmond's Fan District on the sunny morning after the election. Happy people on the street were waving and giving thumbs-up signs to one another like the Redskins had beaten the Cowboys, or perhaps a particularly tedious spell of bad weather just ended. For many Democrats, coast-to-coast, that morning’s headlines were probably the brightest sign they’d seen in a long time. It says here Kaine’s win also sent a clear message to America’s politicians of every stripe -- wise up, like it or not, we are all living in a post-Katrina environment. 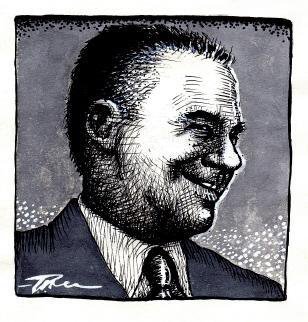 Gov. Tim Kaine
Illustration by F. T. Rea
It took almost four whole years for an event of sufficient impact to jostle the collective national psyche enough to allow for turning the page on the shock and anger of 9/11. Hurricane Katrina has done it. Nobody is forgetting 9/11's tragedy but putting it into its historical perspective is healthy and useful. Obviously, there's a big difference between a four-pronged terror attack that kills thousands and violent forces of nature that do the same. Yet the nightmare for those unlucky enough to be in the wrong place at the worst of times can be much the same. The sense of helplessness -- rampant anxiety -- shared by all for some time after such catastrophes has similarities, too.

After absorbing the shock and anger that Katrina set loose on the Gulf Coast Americans now have a fresh perspective on how not to prepare for, and deal with, calamities.

In the numbing smoke-filled air of Ground Zero and the panic of the anthrax scare Republicans sought and gained power. In the fearful public’s eye they seemed better suited to deal with the situation than did the Democrats. Plus, people naturally rallied around their president. Consequently, the political pendulum suddenly swung to the right, even further than many of us thought possible. In the fours years since those hijackings and exploding buildings, in truth, the Bush administration's response has not worked out all that well on any front. Here we got a fear color code, now stuck on yellow. Abroad, it has created an unfolding disaster in Iraq with no end in sight.

There's plenty more but to cut to the chase -- it took a hurricane blowing into New Orleans to truly reveal what a bad joke the Bush administration’s signature Homeland Security Department was -- “Brownie, you’re doing a heck of a job.”

Out of nowhere it was like an instant civics lesson for the whole country -- hey, sometimes only the government can fix it, or it doesn't get fixed. Opportunists who’ve been getting elected by telling us how “government can’t solve the problem because it is the problem,” don’t necessarily know much about how to make government's gears work smoothly when the need arises. In a crisis they can be useless.

After years of slogans from tax-cutting, chest-beating Republicans, claiming to be devout fiscal conservatives and robust can-do guys, in the real world -- post-Katrina -- it's turned out some aren't much more than poseurs. So, perhaps more than anything Jerry Kilgore or Tim Kaine ever said on the stump, the muddy horror show in New Orleans set up the day for a practical, upbeat Democrat to win in Virginia, two months later.

Moreover, Kaine is an unapologetic believer in the power of government to improve the lives of the people it serves. To his credit, Kaine has always been that sort of guy, he never denied it. So, it’s quite fitting that he should be the first to benefit from the pendulum starting to return from its wild swing to the right.

As far as how much of a boost Kaine’s win will give to Mark Warner’s presidential bandwagon, who knows? It certainly can’t hurt him. Other than buffing up Warner's image as a winner on the national stage, what does Kaine's victory in Virginia mean for the rest of the nation?

Meanwhile, in this commonwealth, Virginians are generally more optimistic about the future. They have seen a state government solve big problems, or at least reverse negative momentum; they know it can be done. That speaks well for the futures of both Warner and Kaine.