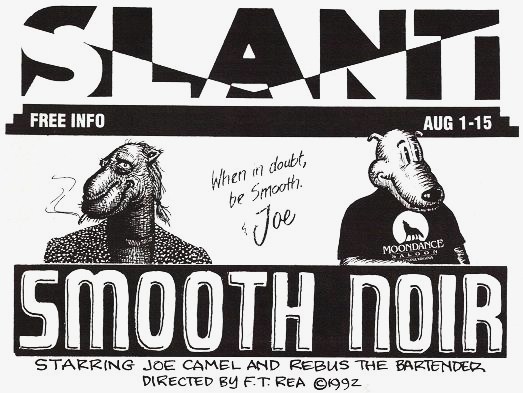 Here's a flashback to an issue of SLANT 27 years ago. It was published when the infamous Joe Camel ad campaign was still popular, so I had to weigh in. In this time the USA's tobacco industry was still riding high ... but not for long. In August of 1992 the art above appeared over the text below:


It's Happy Hour. Rebus starts the Lamberts, Hendricks and Ross tape that he had selected to kick off his shift. In walks his first customer.

Although Rebus recognizes him immediately, even without his makeup, he doesn't call attention to it. Joe looks like he would rather not be bothered.

Joe: Two shots of Cuervo Gold. No fruit. No salt.

The bar's only customer slaps the first empty glass down onto the cold marble as Rebus turns the stereo's volume up a notch.

Joe: The tests came back. It's the Big C. I'm doomed. It's too late to operate. Just like that -- cancer. Kaput!

Rebus: Well, er, in that case, I'll spring for the second one, too.

Rebus: How about a sandwich?

Rebus: Sure. Like something to eat. We've got a killer cold meatloaf sandwich, or...

Joe: Cancer of the hump.

Joe: They said my five-pack-a-day habit probably had nothing to do with...

Rebus: I didn't even know you had a hump. Like, it never shows in the commercials.

Joe: I wear a corset. We all do. It's part of the act. The Mad Ave. geniuses want smooth camels, not hunchbacks. Hey, let me tell ya, they tighten those babies down with a torque wrench.

Rebus: I won't say anything about it.

Joe: I'm not hungry. How 'bout another shooter?

Joe: Did they say how, how long I've got?

Rebus: Yeah and no offense meant.

Rebus: Cancer of the hump! What a bad break.

Joe: I deserve it.

Rebus: Hey, nobody deserves hump cancer. Not even...

Joe: I do man. I'm paying the price for selling my soul to the devil. All those kids.

Joe: Above all else, be smooth. Don't you want to be the smoothest dude?

Rebus: Come on Joe, kids are going to smoke cigarettes regardless of...

Joe: Maybe, but this campaign was slick. They brought in behavioral voodoo scientists.

Rebus: Joe, it's not your fault. You've just been dealt a bad hand. Joe, ah, that is your real name?

Joe: What's in a name? What's real? Way back, maybe before your time, people knew me as Clyde. Since then I've...

Rebus: Right! Clyde. I knew you looked familiar. Yeah, you worked with a cat named Ahab the Arab. But, now you look, like, ah, wider.

Joe: You're talking 30 years since that gig. Who hasn't put on a little weight?

Rebus: I can dig it. But it's still not your fault if a kid smokes. Everybody's got to earn a living. You're like Tony the Tiger or Ronald McDonald, or...

Joe: No! I knew it was wrong. I went to the meetings. I knew the marketing strategy. We were going after third-graders. It was sick.

Rebus: So, what are you going to do?

Joe: Get drunk, then make a plan.

Rebus: Good move. Ready for another?

Joe: I wonder if strapping my hump down made the cancer, ah...

Rebus: Maybe it's never too late to beat the devil. They made you a celebrity; call a press conference. Go public with it. Confess! Drop a dime on the subliminal sleazemeisters.

Joe: Do you really think people would listen?

Joe: You're right! I knew getting drunk was a good idea. Hand me that telephone. I'll do it. I'll blow the lid off the...

Joe: I've got work to do; call my agent. And, you know what?

Joe: Let me try one of those meatloaf sandwiches. And, some coffee.

Rebus opens his eyes. The dream was OK until that business about the meatloaf sandwich. Not to mention the stupid chicken-butt joke.

He gets out of bed and walks toward the bathroom. On the way, Rebus remembers the Joe Camel jacket draped over the chair by the door. A steady customer had given it to him at the bar. He picks it up and throws it into the trash can next to the toilet.