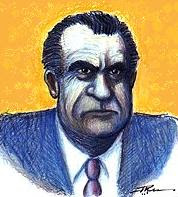 Note: Below this note I've posted a piece I wrote for Richmond.com in 1999; did the illustration back then, too. The reason to post it now is that some revealing quotes from John Ehrlichman have been in the news in the last week. Ehrlichman was one of President Richard Nixon's top aides who went to prison following the Watergate scandal. The following Ehrlichman quote is about Nixon's infamous War on Drugs and the real reasons for it:

Ehrlichman: "The Nixon campaign in 1968, and the Nixon White House after that, had two enemies: the antiwar left and black people. You understand what I’m saying? We knew we couldn’t make it illegal to be either against the war or black, but by getting the public to associate the hippies with marijuana and blacks with heroin, and then criminalizing both heavily, we could disrupt those communities. We could arrest their leaders, raid their homes, break up their meetings, and vilify them night after night on the evening news. Did we know we were lying about the drugs? Of course we did."

August 9, 1999: August is usually a slow month for news, so we are spoon-fed anniversaries to contemplate: Hiroshima’s 54th; Woodstock’s 30th; it was 25 years ago that Pres. Richard M. Nixon took the fall. The entire culture shifted gears the day Nixon threw in the towel.

The brilliant strategist, the awkward sleuth, the proud father, and the coldest of warriors had left the building. August 9, 1974 was a day to hoist one for his enemies, many of whom must have enjoyed his twisting in the wind of Watergate’s storm. It was the saddest of days for his staunch supporters, whose numbers were still legion.

Either way, Richard Nixon’s departure from DeeCee left a peculiar void that no personality has since filled in anything close to the same way. For the first time since his earliest commie-baiting days, in the late-‘40s, Dick Nixon suddenly had no clout.

Upon Nixon's departure, concern for social causes went out of style for a lot of young Americans. It was time to party. Soon what remained of the causes and accouterments of the ‘60s was packed into cardboard boxes to be tossed out, or stored in basements.

Watergate revelations killed off the Nixon administration’s chance of instituting national health insurance. On top of that, many people have forgotten that he was also rather liberal on environmental matters, at least compared to the science-doubting Republicans who have followed. Although he was a hawk, Nixon was moderate on some of the social issues.

Nixon's opening to China and efforts toward détente with the Soviets are often cited as evidence of his ability to maneuver deftly in the realm of foreign affairs. No doubt, that was his main focus. Still, at the bottom line, Nixon is remembered chiefly as the president who was driven from office. And for good reason.

Nixon’s nefarious strategy for securing power divided this country like nothing since the Civil War. Due to his fear of hippies and left-wing campus movements, Nixon looked at ex-Beatle John Lennon and instead of a sarcastic musician, in his view he saw a raw power to galvanize a generation’s anti-establishment sentiments. Fearful of that imagined potential, the sneaky Nixon administration did everything it could to hound Lennon out of the country.

Nixon deliberately drove a wedge between fathers and sons. To rally support for his prosecution of the Vietnam War, he sought to expand the division between World War II era parents and their baby boomer offspring. The families that never recovered from that time's bitterness were just more collateral damage.

However, Nixon’s true legacy is that since his paranoia-driven scandal, the best young people have no longer felt drawn into public service. Since Watergate the citizens who’ve gravitated toward politics for a career have not had the intellect, the sense of purpose, or the strength of character of their predecessors. We can thank Tricky Dick for all that and more.

So weep not for the sad, crazy Nixon of August, 1974. He did far more harm to America than whatever good he intended.

Some commentators have suggested that he changed over that period, even mellowed. Don't buy it. The rest of us changed a lot more than he did. On top of that, Nixon had 20 years to come clean and clear the air. But he didn’t do it. He didn't even come close. In the two decades of his so-called “rehabilitation,” before his death in 1994, Nixon just kept on being Nixon.

So, spare me the soft-focus view of the Nixon White House years. Tricky Dick's humiliating downfall should be a lesson to us all -- he surely got what he deserved.


Note: Reading what Ehrlichman had to say about the War on Drugs, it's still damn hard for me to summons up much forgiveness for Nixon. But given what Ehrlichman said about the platform of lies the War on Drugs rested upon, it should make us all wonder about some of the disinformation that's being promulgated today by politicians seeking ever more power. Shouldn't we be now be thinking about what long-term effect the worst of it could have on the years to come?
Posted by F.T. Rea at 10:57 AM No comments: 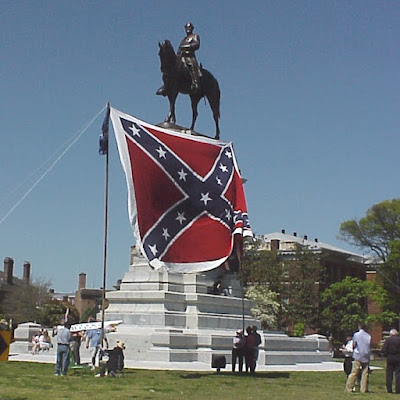 Note: "Propaganda in Bronze" (as edited) by STYLE Weekly can be seen here. It is the Mar. 16, 2016, issue's Back Page. What appears below is the copy I submitted. (The differences are small but real.)

Officials in New Orleans, Baltimore and Austin recently came to the realization that monuments glorifying the Confederate States of America (1861-65) may no longer have a proper place on public property. Consequently, in those three cities a few statues honoring the Confederacy are in the process of being removed.

On Mar. 7, by passing HB587, a proactive group of legislators in the General Assembly moved to prevent that trend from spreading to Virginia. The bill empowered the state government to seize control over the fate of war-related monuments standing on public property. It wasn't immediately clear whether the bill's language would also block historically accurate signage from being placed near the statues of Confederate heroes on Monument Ave, as has been suggested by some Richmonders as a way of providing a context for the memorials.

Given what had happened in the three aforementioned cities, it seems Virginia's lawmakers decided it was time to take the “public” out of public art. Anyway, whatever their intentions were, for the immediate future that won't matter. Gov. Terry McAuliffe vetoed HB587 on Mar. 10.

Nonetheless, going forward, the discussion over what to do about Confederate memorials on public property is hardly going away. Virginians still tethered to yesterday's thinking about the Civil War might not like it, but times have changed. The propriety of making heroes out of men who are now seen by many as having been traitors in their day is being questioned like never before.

What was once unthinkable in Central Virginia is now possible. Want proof?

Henrico County just decided to take Sen. Harry F. Byrd's name off the front of a public school. Some people will surely squawk, saying the renaming of the middle school amounts to rewriting history. But given Byrd's association with the Massive Resistance movement of the 1950s and '60s, that move may have been long overdue.

Most of the monuments honoring the Confederacy that stand today in at least 20 states were put in place during the late-1800s/early-1900s. It was an era in which Lost Cause misinformation was being promulgated by stubborn sympathizers of the Confederacy. Plainly, they sought to paint over the haunting politics of the Civil War. Which was a propaganda campaign, if there ever was one.

Fast-forward to 2016: Whether it's in Richmond or New Orleans, propaganda cast in bronze is still propaganda. Today that propaganda's useful life as a political tool has faded into the mists. Now Monument Avenue's row of statues have to stand on their own as worthwhile art that has outlived its original purpose. That's one of the differences between the statues of Robert E. Lee and Jefferson F. Davis.

The solemn Lee Monument passes the art test, even for many who have no warm regard for the sentiments of Lost Cause thinking. Whereas, for me, the awkward assemblage that is the Davis Monument represents bad medicine.

It should be remembered that the three Confederate generals with statues on Monument Avenue – Lee, Stuart and Jackson – were Virginians. Say what you will about the Civil War, they served their home state. However, since Davis was not a Virginian, the main reason to honor him in Richmond is that he served as the president of the Confederacy. More than anything else, doesn't the Davis Monument celebrate the Confederate States of America, itself?

Speaking of public art and politics, the simmering brouhaha over removing a beloved live oak tree from its home at the triangular intersection of Adams St., Brook Rd. and Broad St., in order to place a statue of Maggie L. Walker there, is another example of how public art can get entangled with politics. Mayor Dwight Jones apparently wants it done, pronto, but there are plenty of locals who oppose him.

Some want to protect the tree. Others would like to see a Walker memorial created, but placed elsewhere. Which leads me to ask: How about where the Davis Monument sits today?

Maybe putting a Walker statue on the fringe of Jackson Ward is best. Still, I'm not the only one who thinks new monuments should be added to Monument Avenue. Moreover, if putting a Walker Monument on Richmond's most famous street would feel like a righteous step toward atonement for Richmond's role in a war to protect the slave market business that once thrived here, what's wrong with that?

The story of the unveiling of such a statue on Monument Avenue would make worldwide news. It would be good news about how Richmond is changing. And, why stop with Maggie Walker? Surely there are other Virginians who deserve to be considered. How about Justice F. Lewis Powell?

Finally, let's stiff-arm the absurd notion that dismantling an old statue, to ship to it off to a museum, amounts to rewriting history. No one is suggesting that Jefferson Davis should be banished from history books. Davis was a key player in an important period of American history. Still, the public's view of his worthiness to be elevated to the status of a hero is just not the same in 2016 as it was when the Davis Monument was unveiled in 1907.

New Orleans already did the right thing. So did Baltimore and Austin. How long will Richmond's City Council members wait to face the music? In the meantime, thank you, Gov. McAuliffe.