The most passionate anti-Obama forces don’t always agree on which putdowns to hurl at him, so -- non-stop! -- we’ve heard a variety of accusations from them over the last few years: Obama is a "secret Muslim." Obama is a "socialist." Obama is the "biggest liar" ever to occupy the White House. Obama is an "alien" (Kenya, Mars, take your pick).

Since producing the credible evidence to back up any of that name-calling is more difficult than just SHOUTING it, well, that means the aforementioned hurlers have mostly believed what they were saying on blind faith and wishful thinking. Or, they haven't necessarily cared how true any of it was, because many of them haven't been saying what really has been bothering them about President Barack Obama, all along. So, they call him names they feel are distasteful. Which is why some now say he is "gay."

However, I suspect most honest adults in America, liberal, conservative or indifferent, know in their hearts what the cloaked reason has been and remains. Perhaps the hurlers are the most revealing when they angrily and preemptively deny their "racism."
Posted by F.T. Rea at 2:35 PM No comments: 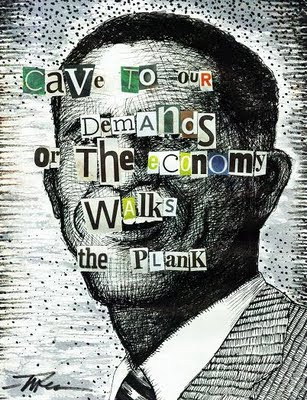 If the Republicans' nefarious strategy to do with the debt ceiling smells familiar, it should. Yes, we played this same game in 2011. (So I'm recycling this 'toon I did two summers ago.)

Today the would-be saboteurs of Obabamacare don't have the backing of the public. Hey, Obama won reelection just 10 months ago!

But a few Republicans in Congress seem to think it will boost their political careers to threaten to stop the federal government from being able to pay its bills. In a sense, they're saying they're willing to nuke the nation's economy, if they don't get their way.

Well, I can think of no good reason for Democrats to cave in to such outrageous demands.
Posted by F.T. Rea at 12:28 AM No comments:

The pundits on the left are still bellyaching that President Barack Obama was willing to bomb Syria. The pundits on the right are outraged at the president's weakness for consulting Congress, AND for not bombing Syria (yet).

My sense of what Obama is more concerned with is how historians will tell the story of managing to avoid starting another war in the Middle East. And, how America and Russia got Syria's outlaw government to admit to hording poison gas weapons, AND to be willing to give them up.

And, how will historians regard a president who did all that, in spite of the obstruction and sabotage the Republicans have hurled at him since he took office?

If the crazy Congressional Republicans do choose to renege on payments due, by not raising the debt ceiling, right wing pundits may applaud. But who thinks any historians will give them high marks for such mischief?

So I’m laughing at today’s know-it-all pundits. And, I suspect there are some folks who work at the White House who are laughing, too.
Posted by F.T. Rea at 8:31 PM No comments:

So does President Barack Obama want to bomb Syria, or not?”

Maybe. Or maybe Obama wants to be slowed down and prevented by Congress and other nations from bombing Syria, just long enough to force a better solution to this dilemma than bombing Syria.

The wily Commander in Chief might have said, "Please don’t make me NOT bomb Syria."

The wiliest reverse psychologist of all-time, Brer Rabbit, would have understood the strategy immediately.

Note: for anyone who could have a fit of despair over the perceived inappropriateness of mentioning a Uncle Remus character and Obama in consecutive paragraphs, perhaps this commentary about current events is one you should skip reading.

Back to Syria, a country I’ve never see with my own eyes and one I know very little about: Since the news about the use of chemical weapons in Syria surfaced last month Obama has had a nasty problem on his hands. At this point, the most nettlesome aspect of it seems to be the distinct possibility of it drawing the USA into killing more people in the Middle East -- all in the name of seeking peace.

Perhaps the only good thing about this new problem, so far, is that it has shoved the news about Republicans in Congress playing games with the debt ceiling and a government shutdown off the front page. Which is one of the clues to what Obama may be up to with his threats to punish Syria's wicked dictatorship for its supposed use of chemical weapons.

Syria’s President Bashar Hafez al-Assad denies it; evidence be damned, he’s sticking to his story. Well, I have no idea how good the “proof” is that makes Assad look like he’s lying through his dictator teeth. Time will tell.

When it comes to provocations for war American presidents have been lied to, and they've occasionally told lies. So, I can’t completely dismiss the idea that somebody other than Assad, himself, is actually responsible for this alleged use of chemical weapons in Syria. Still, as it stands, today, many people are saying America must launch a batch of cruise missiles to blow up selected targets in Syria.

Obama says a “red line” has been crossed. He says he feels compelled to protect a "norm." While he stands ready to launch the missiles, as a commander in chief, as a president, Obama says he wants Congress to authorize the proposed strike in Syria ... and own whatever it leads to down the road.

My guess is the saber-rattling Obama is working a Brer Rabbit Gambit. It’s almost a reverse Brer Rabbit Gambit, in that he‘s saying he has to bomb Syria, even though he doesn’t want to, so don’t hold him back ... when being held back is exactly what he wants.

Yes, I'm saying Obama wants Congress to delay the bombing run. And, he wants other countries to weigh in, to try to find alternatives to bombing Syria. Russia already has.

Moreover, Obama wants to make people all over the world think seriously about the use of chemical weapons and what should be done about it. Like, is there a damn “red line” about using certain weapons of mass destruction, or not?

Obama wants to jerk billions of heads up out of the sand and make all of us bystanders look at this very complicated situation. And, it says here that most of all, Obama wants to drive Assad out of Syria.

On top of that possibly-brilliant-but-definitely-risky stalling maneuver’s effect on the prospects for avoiding another war for America, it is also tying the Republicans in knots. Some of them are in the process of making fools out of themselves, yet again, and perhaps weakening their own power within the ranks of the GOP.

Don’t get me wrong, I’m not saying any of this is a slam dunk. But if Assad suddenly decides he really ought to get out of Syria, before the missiles come and drastically weaken his power to scare his many enemies, it won’t surprise me all that much. He’s seen what happened to other dictators who stayed too long at the party.

Right now, Assad might be able to go into exile in Russia and take a billion dollars with him. But the clock is ticking. Maybe the late-breaking notion of Assad allowing the UN, or some international body, to take his WMD toys away from him is worth pursuing. Like, if we get to take possession of most of his supply of deadly gas and haul it off, to be destroyed, then nasty old Assad STILL has to get out of town, that might work, too.

No matter how long Assad chooses to stay, to make the Brer Rabbit Gambit work at this point America's trickster president has to make it look like he’s got an itchy trigger finger. Then he has to let the various actors play their roles, and wait…

Note: This was written before Obama’s 9 p.m. address on this crisis, so I may soon want to take all of this back.
Posted by F.T. Rea at 7:04 PM No comments:

Here's the copy for a press release about a new project. I began sending it out to the Richmond-area media today. Please feel free to share this notice. It might interest your friends who are film buffs.


Date: September 3, 2013
To: All media for immediate release
Re: The Bijou Backlight

With Labor Day in the rear-view mirror the Bijou Backlight, a blogzine based in Richmond, VA., is a month old.

The Bijou Backlight is devoted to the appreciation of film in all of its forms. Lovers of movies, old and new, constitute its growing readership. Beyond its focus on movies, old and new, the Bijou Backlight exists to help develop and promote the Bijou, a small movie theater on its way from being a fond dream to becoming a bona fide work-in-progress.

The Bijou Backlight offers its readers a variety of film-centric articles, columns and blurbs to mull over. Occasionally it serves up an opportunity to take in some of the films mentioned. And, it is in the process of telling the story of building a film center. Once it opens its doors the Bijou Film Center will have three revenue-generating aspects of its operation in Richmond’s Arts District. They will be:

For background information on them go here.

*
To read a related story in STYLE Weekly penned by Brent Baldwin go here.
Posted by F.T. Rea at 3:19 PM No comments: