Today, my delight at the wins for Barack Obama and Tim Kaine is pure and overflowing. So much so, I'll save the I-told-you-so stuff for tomorrow; same goes for the sarcasm. For me, as a Virginian, today is for smiling. Can't say for sure, but percentage-wise, I don't think I've ever voted for so many winners before.

And, to bring it home, I’m offering my congratulations to all the winners in Richmond. Among them, I’m particularly happy to see that Jon Baliles (1st District) and Parker Agelasto (5th District) won and will be new members of City Council.

As far as yesterday’s losers go, I have some understanding of the sudden fall from being a candidate in the middle of all the energy that surrounds a campaign on Election Day, going from one precinct to another to see and feel the turnout, joking around with the reporters, etc., to being an also-ran at your own victory party -- a loser.

Here’s a story (first published in STYLE Weekly in 2000) about my lone foray into the opportunity to have such a severely bipolar day. It was in 1984 that I fooled myself into running for political office. My victory party, such as it was, unfolded at Grace Place, one of my all-time favorite restaurants.

The Sound by F.T. Rea 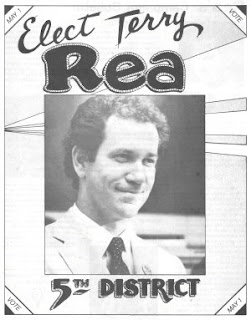 The handbill in this story

In the spring of 1984, I ran for public office. In case the Rea for City Council campaign doesn’t ring a bell, it was a spontaneous and totally independent undertaking. No doubt, it showed. Predictably, I lost, but I’ve never regretted the snap decision to run, because the education was well worth the price.

In truth, I had been mired in a blue funk for some time prior to my letting a couple of friends, Bill Kitchen and Rocko Yates, talk me into running, as we played a foozball game in Rockitz, Kitchen's nightclub. Although I knew winning such an election was out of my reach, I relished the opportunity to have some fun mocking the system. Besides, at the time, I needed an adventure.

So it began. Walking door to door through Richmond’s 5th District, collecting signatures to qualify to be on the ballot, I talked with hundreds of people. During that process my attitude about the endeavor began to expand. People were patting me on the back and saying they admired my pluck. Of course, what I was not considering was how many people will encourage a fool to do almost anything that breaks the monotony.

By the time I announced my candidacy at a press conference on the steps of the city library, I was thoroughly enjoying my new role. My confidence and enthusiasm were compounding daily.
On a warm April afternoon I was in Gilpin Court stapling handbills, featuring my smiling face, onto utility poles. Prior to the campaign, I had never been in Gilpin Court. I had known it only as “the projects.”

Several small children took to tagging along. Perhaps it was their first view of a semi-manic white guy — working their turf alone — wearing a loosened tie, rolled-up shirtsleeves, and khaki pants.

After their giggling was done, a few of them offered to help out. So, I gave them fliers and they ran off to dish out my propaganda with a spirit only children have.

Later I stopped to watch some older boys playing basketball at the playground. As I was then an unapologetic hoops junkie, it wasn’t long before I felt the urge to join them. I played for about 10 minutes, and amazingly, I held my own.

After hitting four or five jumpers, I banked in a left-handed runner. It was bliss, I was in the zone. But I knew enough to quit fast, before the odds evened out.

Picking up my staple gun and campaign literature, I felt like a Kennedyesque messiah, out in the mean streets with the poor kids. Running for office was a gas; hit a string of jump shots and the world’s bloody grudges and bad luck will simply melt into the hot asphalt.

A half-hour later the glamour of politics had worn thin for my troop of volunteers. Finally, it was down to one boy of about 12 who told me he carried the newspaper on that street. As he passed the fliers out, I continued attaching them to poles.

The two of us went on like that for a good while. As we worked from block to block he had very little to say. It wasn’t that he was sullen; he was purposeful and stoic. As we finished the last section to cover, I asked him a question that had gone over well with children in other parts of town.

“What’s the best thing and the worst thing about your neighborhood?” I said with faux curiosity.
He stopped. He stared right through me. Although I felt uncomfortable about it, I repeated the question.

When he replied, his tone revealed absolutely no emotion. “Ain’t no best thing … the worst thing is the sound.”

“What do you mean?” I asked, already feeling a chill starting between my shoulder blades.

“The sound at night, outside my window. The fights, the gunshots, the screams. I hate it. I try not to listen,” he said, putting his hands over his ears to show me what he meant.

Stunned, I looked away to gather my ricocheting thoughts. Hoping for a clue that would steady me, I asked, “Why are you helping me today?”

He pointed up at one of my handbills on a pole and replied in his monotone. “I never met anybody important before. Maybe if you win, you could change it.”

Words failed me. Yet I was desperate to say anything that might validate his hope. Instead, we both stared silently into the afternoon’s long shadows. Finally, I thanked him for his help. He took extra handbills and rode off on his bike.

As I drove across the bridge over the highway that sequesters his stark neighborhood from through traffic, my eyes burned and my chin quivered like my grandfather’s used to when he watched a sad movie.

Remembering being 12 years old and trying to hide my fear behind a hard-rock expression, I wanted to go back and tell the kid, “Hey, don’t believe in guys passing out handbills. Don’t fall for anybody’s slogans. Watch your back and get out of the ghetto as fast as you can.”

But then I wanted to say, “You’re right! Work hard, be tough, you can change your neighborhood. You can change the world. Never give up!” During the ride home to the Fan District, I swore to myself to do my absolute best to win the election.

A few weeks later, at what was billed as my victory party, I, too, tried to be stoic as the telling election results tumbled in. The incumbent carried six of the district’s seven precincts. I carried one. The total vote wasn’t even close. Although I felt like I’d been in a car wreck, I did my best to act nonchalant. 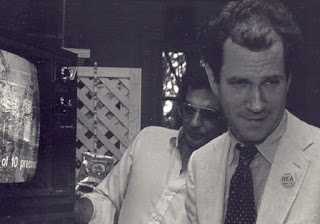 This shot in Grace Place was snapped just after I saw the first news report on the election results. At that moment I knew I couldn't win.

In the course of my travels these days, I sometimes hear Happy Hour wags laughing off Richmond’s routine murder statistics. They scoff when I suggest that maybe there are just too many guns about; I’m told that as long as “we” stay out of “their” neighborhood, there is little to fear.

But remembering that brave Gilpin Court newspaper boy, I know that to him the sound of a drug dealer dying in the street was just as terrifying as the sound of any other human being giving up the ghost.

If he's still alive, that same boy would be older than I was when I met him. The ordeal he endured in his childhood was not unlike what children growing up in any number of the world’s bloody war zones are going through today. Plenty of them must cover their ears at night, too.
For the reader who can’t figure out how this story could eventually come to bear on their own life, then just wait … keep listening.