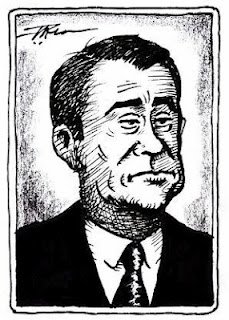 After all, Walker has been a Poster Boy celebrity for the nationwide ambitions of Tea Party Republicans and the American Legislative Exchange Council (ALEC), to do as much damage to America’s union movement as possible.

As the political landscape is spread out today, with the unleashing of Super Pac money the Supreme Court's Citizens United decision brought on, if unions become toothless in the scheme of things, it will make for the most tilted playing field, money-wise, geezers like me have ever seen.

Thus, while it may be ruthless, it is entirely understandable why the elephants want to crush the donkey’s resources. What would be next on such a power-consolidation agenda is anybody's guess.

Money angles are what most of the liberal analysts have seized upon to talk about. Walker's bravery and manly charisma are what the conservatives like to dwell on. But there were other considerations in play in yesterday’s news-making events in Wisconsin.

In the first place, this election was a do-over. Walker defeated Barrett a year-and-a-half ago. So, at least at this desk, there’s some question about whether Barrett was really the best candidate to run against Walker. Which leads me to my next point: What do I know about Wisconsin’s politics?

Moreover, how much do the jabbering experts on the cable news channels know about the history of politics in Wisconsin, far from either coast?

So far, most of them seem to be seeing the 2012 recall elections in Wisconsin through a national prism, as foreshadowing for the Romney vs. Obama showdown. History tells me that approach is frequently a shallow reading of situations in states with their own peculiarities, involving particular personalities.

What I do remember about Wisconsin is that it has been a home to outspoken partisans on both the left and right ... sometimes simultaneously. It’s my understanding the guys who wear those triangular wedge-of-cheese hats drink a lot of brandy and beer up there; I probably heard that in the Texas-Wisconsin Border Café, a favorite long-lost local dive. Hey, in 1966, I spent the better part of a day in Milwaukee. And, I surely did enjoy watching Russell Wilson (Collegiate HS in Richmond) play quarterback for the Badgers last season.

No, I don’t really know much about Wisconsin. Neither do a lot of people.

Yes, yesterday’s thumping of Mayor Barrett was due in great part to his lack of money. On top of that there were the losing candidate’s weaknesses, but I'd like to add that it also had to do with recall elections.

Yes, in spite of all the hoopla about Wisconsin’s impact of national politics, some voters who may happily vote for President Barrack Obama in November didn’t support the Democrats yesterday, maybe because they think recall elections are bad medicine.

Unlike the talking heads on TV are wont to do, I won’t guess at how many.

But I do know that today’s trend that has bad losers refusing to accept the results of elections is a growing problem on both sides of the aisle. The eight years of crying about the stolen presidential election of 2000, on the part of some Democrats, was bad form. Today, the refusal of some Republicans to accept Obama’s well-documented history as legitimate is outrageously tedious.

My thinking is that if a Governor is convicted of a felony, throw the bum out. Short of that, the voters are stuck with the winner for their entire term. If you want shorter terms, to be safe, or term limits, then fine. But as much as I wanted Walker to lose, and I’m worried about what his victory will mean for unions, I’m still not so sure there should have been a special recall election in Wisconsin, in the first place.

So, if Walker’s victory means there will be fewer recall elections in America's future, well, that will be the silver lining to what was some cloudy bad news.