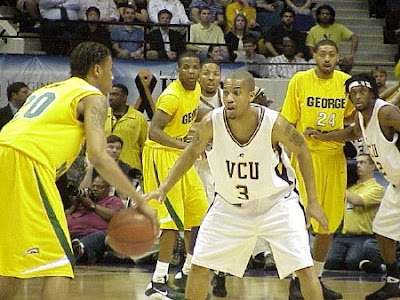 Eric Maynor checks Cam Long in first-half action at the Coliseum. Maynor had no trouble guarding a bigger man, the player many observers would say is the most physically talented of the Patriots.
In winning the CAA tournament, to validate their ticket to the Big Dance, the Rams beat the Patriots of George Mason in every aspect of the game, on every inch of the Richmond Coliseum's basketball court: VCU 71, Mason 50.

No, this wasn't coach John Larranaga's best Patriots squad of recent years. But Larranaga's teams have always played hard and smart, especially in postseason games. On Monday in front of a sell-out (11,200) crowd that hardly mattered -- Mason was simply in over its head.

VCU's all-everything point guard, Eric Maynor scored 25 points and dished for eight assists. His teammate, sophomore center/forward Larry Sanders was good for 18 points, 20 rebounds -- 20 ! -- and seven blocked shots. It's been a few years since NBA scouts were looking at two Rams with the chops to maybe play at the ultimate level of pro basketball.

Any coach who watches the tape of this game will shudder at the thought of facing coach Anthony Grant's Rams, as they looked in crushing Larranaga's Patriots. With a 24-9 record, Grant has VCU peaking and gaining confidence as the high-stepping Rams look forward to the Ides of March, to learn who their opponent will be. 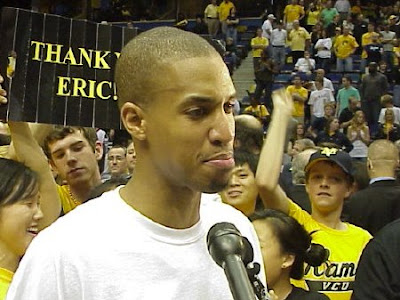 After the game on the floor Maynor mulls over a reporter's question.
Although Maynor is the only senior on Grant's roster, this young Rams team should be fearless from here on. They can run with anybody. Resulting from its tournament play, RealTime RPI has VCU at No. 50 in the RPI and No. 47 on its Power Ratings page (whatever that is).

For more coverage of the CAA tournament click here to visit the Fan District Hub.

As a GMU graduate I wish Mason had won, but I have to admit that VCU played a good game and deserved to win based upon last night's performance.

Going into this game I expected VCU would win. But I was amazed to see VCU take Mason to the woodshed.

Don't know how it looked on TV, but from my seat on press row the Rams looked like they could have beaten a lot of good teams the way they played last night.