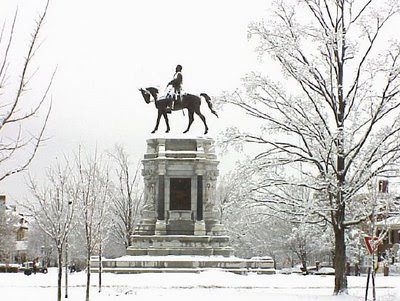 March 2, 2009
Snow brings back memories. When we see the way snow changes the world around us into resembling high contrast black and white photographs, we can't help but connect to when we saw that distinctive look before. In Richmond, it's a look we don't see every year.

We remember when a happy puppy first encountered snow. We remember snowball fights and the raised-glass revelry in crowded Fan District bars. We remember particular people we associate with yesteryear's snowy landscapes.

In the winter of 1958-59 I had just turned 11. Buster was probably six or seven months old when he saw his first snow. He was a white mutt, supposedly he had some Spitz in him. Watching him rooting in the snow, barking at it, rolling in it, was hilarious. He seemed to absolutely love the smell and feel of snow.

The best snowball shot I ever made was in the early '80s on West Grace Street. Rebby Sharp and I were across the street from the Biograph Theatre, ducked down behind some parked cars. It was after dark but I can't say how late it was. There was a snowfall underway and it was sticking. Rebby and I were battling some friends, who were in front of Don's Hot Nuts, next door to the cinema, which I managed in those days.

Rebby and her band, the Orthotonics, used to practice sometimes in the theater's large auditorium during off hours. Some of Rebby's fans might not have known it, but she wasn't a bad athlete; Rebby had a decent throwing arm.

When some snowballs thumped off of Donald Cooper's peculiar bright green candy business storefront, he came out on his porch to tell the snowball fighters to scram. As everyone associated with the Biograph knew Cooper to be an utter pest and the worst neighbor in the world, there was no need for a plan.

Rebby threw first. My throw left with dispatch a split second later. Both were superbly well put shots. When Cooper extended his hand to block Rebby's incoming snowball it shattered to shower him, just as my throw hit him square in the forehead ... ba-da-bing!

Cooper quickly retired for the night.

The best rides in the snow I can remember were at Libby Hill. In the late-'70s and early-'80s I spent a lot of time up there. Used to play Frisbee-golf there quite a bit. And, there were a few heavy snows in that same period, which drew me and others to what was called the Slide of Death.

We rode inflated inner tubes from the top of a series of hills in the sloped park down to Main Street below. When the snow was right those tubes went airborne at least a couple of times; the ride was quite exhilarating.

There was a particular time that stands out. Dennison MacDonald, who died in 1984, had hosed down the first hill, so it would freeze in the frigid air and make the track slick as glass.

Eventually, the run to the bottom got so fast you had to be drunk to take the risk of riding. Accordingly, we stood around a fire-barrel passing a bottle of Bushmills around between wild rides.

Chuck Wrenn, who still lives across the street from the launching point of the old Slide of Death, and I talked on the telephone today about that night. We laughed again because both of us had it on our minds before our conversation. We recalled the sight of Duck Baker pretending he was going to ride a shaggy dog down the chute. Duck had us laughing so hard, it's still funny today.

Of course, you had to be there.

Chuck told me that Dennison's oldest son, Staples, was out in the park today. The two of them talked about Staples' father and the inner tube races, etc. The much-missed Dennison was a high-contrast, larger than life figure in his time. He was a big guy with enough enthusiasm for ten men. He could be like a shot of Bushmills on a cold night.
Posted by F.T. Rea at 12:19 PM

For sledding, try the bowl at the north end of the Lee Bridge!