On the first Saturday of May, every year since 1980, a softball reunion is held. Anyone who ever played on one of the Biograph softball teams from any year has been welcome, plus their families, friends, etc.

Chiefly, the annual get-togethers were set in motion by the initiative of the original Biograph team’s third baseman, Ernie Brooks, who had left Richmond to resume graduate studies at Virginia Tech in 1979. 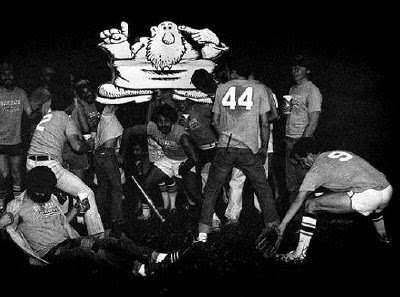 By 1980 the Biograph softball team was called the Naturals. Out of deference to the artist, we did obtain permission from R. Crumb to use Mr. Natural as our team mascot.
Brooks corralled enough former players to challenge what was then the current Biograph team. At this time the Biograph’s softball franchise was one of the cars, maybe the clown car, attached to the runaway train known as the Fan District Softball League.

Serendipitously, that first reunion/old timers game was staged on the afternoon in which the Kentucky Derby would be run. The game was played at Thomas Jefferson HS. Afterward most of us went to the Track Restaurant to join a Derby-watching party already underway.

It’s been Derby Day ever since. The game has moved around to various locations over the years. Several of the guys at the most recent gathering were teammates of mine in 1976, which was the the first summer of organized softball at the Biograph. We called our team the Swordfish, after a joke in a Marx Brothers movie.

That year the Swordfish played a schedule that was not set in advance. Instead, our practice was to challenge established teams to play us for a keg of beer. With a keg of beer on hand for fans and players to drain, those outings were parties, every bit as much as they were athletic contests.

The lucky Swordfish won 15 games of the 17 we played that initial season. In spite of having few experienced softball players on a roster made up of employees, old friends and a few film buffs -- including two French guys who'd never seen a baseball game -- we probably won half of those keg games by coming from behind in late innings.

Typically, our opponents saw themselves as more experienced/athletically superior, which only made it more fun when they bumbled their way into handing us the victory. That first year, it was uncanny how often those supposedly better teams seemed forever willing to overplay their hands.

Now, having played and observed a lot of organized softball, I know that virgin Swordfish squad was absolutely charmed. In any sport, it was the loosest team with which I’ve ever been associated.

Both of the Swordfish’s losses came in extreme situations. The first was the championship game of one of the two tournaments we entered. Yes, we won the other one.

The second was played inside the walls of the old state penitentiary. Located at Belvidere and Spring Streets, the fortress prison loomed over the rocky falls of the James River for nearly 200 years (it was demolished in the early-1990s).

As it happened the guy in charge of recreation at the pen frequented J.W. Rayle, a popular bar of the era, located at Pine and Cary. During a conversation there he asked me if the Biograph team — I played outfield and served as the coach — would consider taking on the prison’s softball team on a Saturday afternoon. Chuck Wrenn had already told the guy the Rayle team would do it, so I went along with it.

As it turned out the first date he set up was canceled, due to something about a small riot.

A couple of weeks later the Swordfish entered the Big House. To get into the prison yard we had to go through a process, which included a cursory search. We had been told to bring nothing in our pockets.

As we worked our way through the ancient passageways, sets of bars were unlocked and then locked behind us. Each of us got a stamp on our hands that could only be seen under a special light. Someone asked what would happen if the ink got wiped off, inadvertently, during the game. He was told that was not a good idea.

The umpire for the games — Rayle played the prison team first, then the Biograph -- was Dennis “Dr. Death” Johnson, a rather high-profile Fan District character, at the time, who played on yet another team. Among other things, Johnson did some professional wrestling, so he was good as hamming up the umpire's role.

The fence in leftfield was the same high brick wall that ran along Belvidere Street. It was only about 230 to 240 feet from home plate. Yet, because of its height, maybe 30 feet, a lot of hard-hit balls caromed off of it. What would have been a routine fly ball on most fields was a home run there. It was a red brick version of Boston’s Green Monster.

The prison team, known as the Raiders, was quite good at launching softballs over that towering brick wall. They seemed to have an unlimited budget for softballs, too. Under the supervision of watchful guards, hundreds of other prisoners seated in stands cheered for the home team. Actually, they cheered good plays in the field and collisions on the base paths more than anything else.

During a conversation with a couple of my friends behind the backstop, I referred to the home team as “the prisoners.” Our opponents’ coach immediately stepped toward me. Like his teammates, he was wearing a typical softball uniform of that era — it was a maroon and gray polyester affair, with “Raiders” printed across the chest in a script and a number on the back.

Most of us wore cut-off blue jeans and one of the two models of silkscreened Biograph T-shirts that were on sale for three busks at the theater.

“Call us the Raiders,” he advised, somewhat sternly, as he pointed to a tortured-graphics mural on the prison wall that said, “Home of the Raiders.” It looked a little like a jailhouse tattoo, blown up large.

“While we are on the field, we’re not The Prisoners,” he said with, ahem, conviction. “We’re the Raiders.”

We all laughed, grateful the tension had been broken. He patted me on the back and thanked us for being there, for agreeing to play them.

In a tight, high-scoring affair the Raiders prevailed. Johnson knew how to play to the crowd with his calls, too. Afterward, I was glad we’d met the Raiders.

Now, I remember I was glad to leave, too. Located smack dab in the middle of Richmond that prison was a nightmare in so many ways.

Nobody is sorry it's gone. The next summer, we were invited back for a rematch with the Raiders. The team went in. But I found an excuse not to go. One dose of that place was enough for me.

In terms of winning and losing, the Biograph teams that played on in the Fan District Softball League, until it folded in 1994, never found anything close to the success that first team knew. Still, I'll wager most of the guys from the 1976 team remember more details about their meeting with the Raiders than any of the games we won.